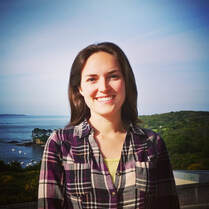 Current: Lecturer in Oceanography at the University of Liverpool, UK
Marine biogeochemistry, electrochemistry

PhD Student at the University of Liverpool (Oct 2012 - Oct 2016)
For my PhD, I researched the factors that affect the bioavailability of copper to marine microorganisms. Trace metals such as iron and copper exist at very low concentrations in the ocean and are important micronutrients to marine microorganisms. The bioavailability of trace elements is controlled by the chemical speciation rather than total concentration of the metal, influencing microorganism growth by controlling whether the element behaves as a toxicant or limiting nutrient. This in turn affects primary productivity and subsequent carbon drawdown. The bioavailability in seawater depends on complexation with organic ligands such as thiols, siderophores and humic substances.

During the course of my PhD I studied copper speciation in a variety of water types, from estuarine environments to the open ocean. Part of my work involved studying the competition between copper and iron for ligands in humic substances. Humic substances are large, complex molecules derived from the degradation of organic matter and have been shown to bind both copper and iron. By studying the chemical relationship between copper, iron and their ligands, I hope to gain a deeper understanding of the processes involved in the biogeochemical cycling of these important nutrients.

I achieved my first class BSc Hons degree in Chemistry with Oceanography from the University of Liverpool in July 2012. My final year project was titled 'Metal speciation and the effect on bioavailabilty to marine organisms', for which I visited NIOZ, NL, to learn algal culturing techniques in January 2012. During my degree I attended a placement year at the NOC Liverpool working for Dr Paul Bell, compiling Matlab scripts for mapping webcam and video data to ground coordinates for wave pattern analysis, September 2010-2011.

After my degree I spent one month aboard the RRS Discovery as part of the Fastnet program collecting and analysing samples for dissolved oxygen, nutrients, DIC/DOC, DOM and trace metal concentrations in June 2012. Following the research cruise, I worked on a joint project for Metrohm UK, Applikon and a UK utility company that provide drinking water in the development of an automated method for analysing arsenic in drinking water, using the vibrating gold microwire electrode and the Applikon ADI 2045.

This took me to the beginning of my PhD in Liverpool, where I developed a method for measuring copper-binding humic substances in seawater leading to the publication of our first paper. We then used the novel method to look at the competition between copper and iron for the ligands within humic substances in estuarine waters, leading to my second paper. I subsequently collaborated with colleagues at UGA, USA, using our expertise in trace metals to study potential copper limitation in Thaumarchaeota in a salt marsh estuary. The final part of my PhD consisted of measuring copper and copper-binding ligands in samples from regular sampling sites along Line P in the Northeast Pacific (GEOTRACES), in colllaboration with colleagues at UBC, Canada.

During my time at Liverpool, I also analysed river samples for the Scottish Environment Protection Agency (SEPA) for chromium speciation on a regular basis, and was involved in a project with Aquaculture fish farm in North Wales, measuring iodide in their samples. I also love teaching, and ran a lecture series for the University of Liverpool's Continuing Education course, 'An Introduction to Oceanography'. I thoroughly enjoy the research, networking and outreach experiences that I have taken part in throughout my PhD. I am also a keen advocate for keeping women in science, and was the postgraduate representative on the Athena Swan panel for the School of Environmental Sciences at the University of Liverpool.

Following my PhD, I moved to the University of British Columbia, Canada, for a short research position working with Maria T. Maldonado on copper speciation to marine diatoms, and setting up a new BASi voltammetry system. I then moved to a CD29 postdoctoral position at l'Institut Universitaire European de la Mer (IUEM) in Brest, France.  Whilst there, I successfully obtained a 2yr LabexMER (now IsBlue) Fellowship, and in addition a Marie Curie PRESTIGE Fellowship, to fund my own research interests. This took me until January 2020. In February 2020, I moved back to the UK to begin a permanent Lectureship at the University of Liverpool.